A Moment for Prophetic Public Action: Since 2020, the Biden campaign set out as part of their immigration strategy a full restoration of the asylum process. President Biden committed that his administration would “restore our asylum laws so that they do what they should be designed to do - protect people fleeing persecution and who cannot return home safely,” “end the mismanagement of the asylum system, which fuels violence and chaos at the border, and “direct the necessary resources to ensure asylum applications are processed fairly and efficiently, while treating families and children with compassion and sensitivity.”

While KBI and many other humanitarian aid organizations at the US-Mexico border celebrated the end of the “Remain in Mexico” or MPP program, and opening a tiny window for a very small percentage of highly vulnerable migrants to be paroled into the US in spring of 2021, we are gravely concerned that at this time there is no access to asylum at ports of entry, and the Biden Administration has not shared any plans to move toward restoring asylum protections in the near future. Instead, we lament that the Biden Administration has been moving further and further from the promise of asylum restoration through continued border closure to asylum seekers, expulsion of asylum seekers to southern Mexico, lateral expulsions designed to disorient, traumatize, and dissuade vulnerable migrants from accessing their legal protections, and the failure to address widely documented, pervasive CBP abuses against migrant families expelled through Title 42 expulsions.

As such, the Kino Border Initiative, in partnership with a number of faith groups and civil society organizations across the border and the US, and inspired by migrants organizing to #SaveAsylum in Nogales, Sonora, Mexico, has discerned that this is the moment to come together in solidarity in anticipation of the October 2 date to reconsider the border closure to migrants.
​
Join the march with asylum seeking migrants at the border wall in Nogales, Arizona and Nogales, Sonora, Mexico on September 25, 2021, 2:00pm PST.
Press Release: CBP closed port of entry after denying access to migrant family
Media Advisory: Tucson Bishop Edward J. Weisenburger of Tucson Accompany Migrants Demanding Biden Restore Asylum 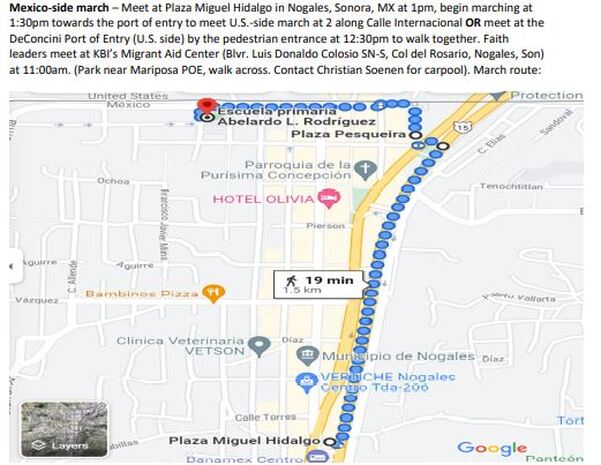 Washington DC, Chicago, IL, Austin, TX
Restore Protections for Holy Families: Interfaith Action at the White House - Sept. 29, Washington, D.C.
On Wednesday, September 29, at 12PM ET faith and civil society groups will gather at Lafayette Square in Washington, D.C. to join in prophetic action in solidarity with migrants denied access to protection by the ongoing implementation of Title 42, and who must wait for the restoration of asylum in border towns fraught with danger. Lifting up the demands and testimonies of migrants impacted by these policy failures, the action will amplify the #SaveAsylum Campaign’s week and national day of action just days before the CDC is to reassess the public health order. Key faith leaders from multiple traditions will raise the call to welcome with dignity, alongside asylum seekers, elected representatives, medical experts, and the broader faith community.
Can’t make it to Washington, D.C.? Watch the livestream above on 9/29 at 12PM ET. 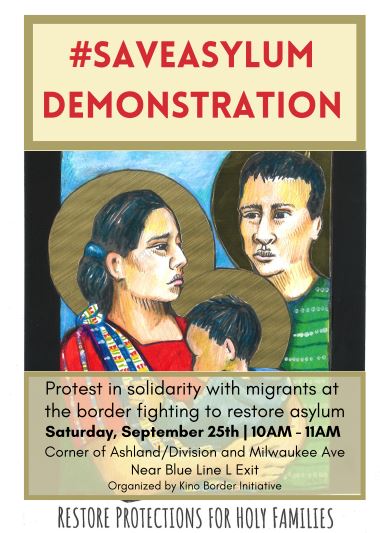 ​Flyer for Chicago Action- September 25, 2021
Hosted by: ​Sisters & Brothers of Immigrants
THIS VIGIL will take place Saturday, September 25 from 10:00 – 11:00 am at the intersection of Ashland / Division / Milwaukee (near the Blue Line). Bring your own signs (we can provide a few) and your support and join us in solidarity.

October 1: Join our National Call-in Day to Restore Asylum, on the eve of the CDC's reconsideration of Title 42, by calling your Representative and your two Senators (If you can’t find your Representative’s number, you can always call the United States Capitol switchboard at (202) 224-3121 and ask for them by name. To call your Senators, use the number 202-224-XXXX, and find the last 4 digits HERE).

Suggested Script for your call:
Hi, my name is X, and I am (congregation or organization affiliation, i.e. a member of St. Francis Xavier parish). I am calling on behalf of X, a migrant who has been denied asylum and is waiting in danger and uncertainty in Mexico (select a name from the litany that can be found HERE.) As (a community leader, person of faith, a descendent of migrants), I believe that families deserve the right to access safety and have their voices heard. I am alarmed that the Biden Administration has refused to uphold their obligations according to US and international law not to return people to danger, a horrific act we committed during the Holocaust, which cost hundreds of people their lives. Under Title 42, we have seen migrants being whipped by Border Patrol agents, migrants sent back to the same places where they were kidnapped or beaten, and migrants rejected over and over at ports of entry without any assessment of the dangers they face in Mexico or elsewhere. This matters to me because (include personal connection to migration).
I would like (Senator or Representative's name) to

Thank you for your consideration, and I look forward to receiving a response from you on this matter.